Algae is the food of the future – Doctor Who agrees

Algae is the food of the future – Doctor Who agrees

What’s the food of the future?

If you watched Season 10 Episode 02 of Doctor Who – named “Smile”, you might have seen our protagonists travelling to the future and enjoying some very strange blue cubes.

“That’s good isn’t it? In the future, we don’t eat living thing, we eat algae!” she says while enjoying a spoonful of the blue jelly-like cube.

It makes sense though.

If you look at all the properties of algae with regards to livestock, it becomes obvious that algae will become a natural replacement for meat and a significant source of vegetarian protein for the future.

I would also mention that the cubes are blue, which is the color of phycocyanin, the natural pigment that you would find in the Kyanos Blue Green Algae.

I wouldn’t go as far as saying that Doctor Who is predicting that Kyanos Blue Green Algae is going to be the food of the future, but I would definitely say that our microalgae is here to stay…

Help yourself to some nice cubes 🙂 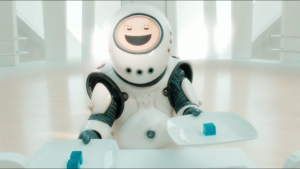 Fablab Festival - A great moment to discover our DIY Bioreactor

Fablab Festival – A great moment to discover our DIY Bioreactor

We so appreciate you stopping by and checking out Kyanos Biotechnologies